The Ethics of Apple Pie!

In August of 2011, Congress passed the Budget Control Act. Though the budget numbers are staggering, well into the trillions of dollars, the essence of the deal was simple. The 2011 agreement allowed the debt ceiling to be raised twice in 2011 to avoid a government shutdown –and then the good folks we send to Washington, D.C. further agreed to reduce spending money in 2013. According to Jeanne Sahadi writing for CNN Money, August 2, 2011, the spending reduction called for $2.1 trillion in spending cuts over the next decade.  This is our Congress in action leading “ethically” and kicking the can down the street in order to avoid the pain of fixing the problem we all face.  As a business ethics speaker, I have to say, “I expected better!” 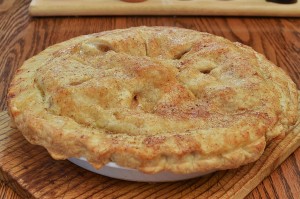 2013 came around and Congress got a little nervous. Spending cuts, eh? Working together, huh?  In 2011, Congress agreed to sequester themselves in deliberation and hammer out a deal. They said they would roll up their sleeves and in the spirit of a nation that won the Second World War, sent astronauts to the moon and helped feed the world, they would come together and agree to spending cuts.

They told us they that everything was open to negotiation; it would be their ethical duty to reduce spending. They would respect that the money they were talking about, the billions and trillions of it, was generated by us; the taxpayers. Congress would reach across the aisle and work together and hip, hip, hooray!

Well, no such luck.

In fact, toward the end of February, when all of the sequestering, hand-shaking and sleeve rolling was scheduled to take place, Congress was as empty as the loser’s locker room an hour after the Superbowl. Congress decided to take a holiday. Instead of working together for our good, they decided to vacation for their good.

They blamed each other for the lack of sequester, of course. The Republicans said that the president needed to show more leadership in proposing tax cuts; the Democrats blamed the Republicans for leaving town.

This game has created a great deal of anxiety and a number of ethical questions.

By essentially ignoring substantive talks on reducing spending in government, are the Congress people we have elected to represent us essentially thumbing their noses at us? Are Democrats and Republicans refusing to work together because they don’t feel responsible to us? Does Congress believe they have no ethical obligation to the very taxpayers who pay their salaries, pensions and benefits?

Many of us tend to view politicians in more of a gray, rather than a black or white area. We become confused by all of those pesky government initials, House Bill numbers and legal talk.

So let’s leave Congress for a bit and pretend two people are in partnership in a factory; they make apple pies.

The apple pies taste fantastic, but they’re expensive. In fact, they cost so much to make, they lose money on every pie they sell. Even though they sell 5,000 a month, sometimes 7,500 a month, they’re up to their cookie cutters in debt.  Because the pies are so wonderful, their investors keep lending them money because there is the genuine hope that they’ll find a way to reduce costs and turn a profit – or at least break even. The investors are also grumbling because they are not only losing more money with every passing month but that the business partners don’t even like each other. Oh, they make great pies alright, but they cannot get along and they take it out on the investors, the very people who fund the operation.

One business partner is angry because the other partner wants to spend money for advertising; the other partner is angry because the ingredients are too expensive. In fact, the partners bicker so much; they threaten to shut the factory down altogether and thereby leaving the investors out in the kitchen, so to speak. The investors finally say: “If we agree to lend you a new lump sum of money to keep the business going, will you agree to sit down with each other, hash out your differences and find a way to reduce costs so we can start to become profitable?”

“You betcha,” say the partners.

They agree to a date to talk things out in a closed door, heart-to-heart meeting, but as that date draws near, they again start to bicker. They each have a plan to reduce costs, but the other partner hates the plan. On the date the meeting is supposed to be taking place, several investors decide to drive over to the factory to see how things are going. A forlorn looking assistant is sitting at an empty desk in the silent pie factory. She tells the investors that one partner has taken off for a week to Paris (on the company dime) while the other might be at a four-star hotel in either Palm Springs or Cleveland, she isn’t certain. But one thing she does know for certain: the partners still don’t like each other.

The ethical dilemma of the pie factory investors is not so gray. The partners knowingly turned their backs on their responsibilities and walked away. They could have come to agreement, despite their differences, and satisfied the investors with a plan. They didn’t.

We now turn again to Congress.

We have given them our money and our trust. The ethical thing would have been for them to resolve their differences so that we, the taxpayers, could have felt hope and confidence about the future. They could have sequestered themselves, reached across the aisle and arrived at a common plan rather than grandstanding on plans they knew neither side would endorse. Instead, they walked away from a sacred responsibility.

Congress, collectively and ethically, threw a pie in our face.

Is it Ethical for the Government to Dictate or Create Ways to Redistribute Wealth?

Is it Ethical for the Government to Dictate or Create Ways to Redistribute Wealth?