Prison Grievances: When to Write, How to Write by Terri LeClercq, Ph.D

By Chuck GallagherApril 2, 2013 No Comments

Terri LeClercq, Ph.D. in English and University of Texas law school faculty, discovered a need, so she wrote a book for inmates.  The book, Prison Grievances:  when to write, how to write, was just listed by Hottest Books as a best-seller—even though it is a graphic novel with a ‘specialized’ audience. 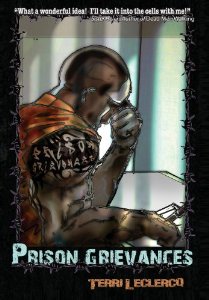 Q:             Obviously, something happened to cause an English professor to write a comic book for inmates.

A:             Oh, my, yes!  I taught college composition, then legal writing, for over 30 years.  The books I wrote were about the art of writing.  Before all this, I didn’t know the difference between a jail and a prison.

A:  Sort of … I joined 646 American citizens silently protesting The School of the Americas, a CIA training ground tucked away in Ft. Benning, Georgia.  For years the school was in Panama, and the Panamanians made the CIA relocate it.  Those of us protesting were hoping our presence would help convince Congress to shut the school.  Instead, they merely renamed it.  No, really.  So we entered an otherwise open Army post, and all of us were fingerprinted, had mug shots, and were given cease-and desist letters.  My 16-year-old daughter and I were suddenly criminals!  Much worse, 25 of the protesters were taken before a federal judge and sentenced to 6 months in federal penitentiaries across the nation.  So I guess you could say “lots of friends of mine” were suddenly prisoners.

A:             Ha!  We were indeed happy to leave Georgia.  But how could anyone be happy, knowing that nuns and priests and social workers were now in prison for … for asking the school’s leaders to stop abusing  American tax dollars and American sensibilities?  Graduates of the School of Americas are directly involved in, or implicated in, numerous murders through Latin America.  No one could be happy to leave, taking  that knowledge with us.

A:             When I read the letters of these nuns and priests, describing prison conditions, I simply could not believe it.  It was hard to face;   I’m a citizen, and these things were being done in my name.  I thought at first, as an academic, that I could research the law, the Prison Litigation Reform Act of 1996, and explain in a journal article how it had been passed (at the foot of a tax bill) and how it took away inmates’ rights.  But three years of writing, and I decided that no one would read it, at least no one who needed to.

A:             Who needs the most to know about writing about prison conditions?  Inmates!  In Texas, the average inmate’s reading level  is 5th grade.  Many are Hispanic and read novellas, which are soap operas in comic book form.  So I had to go where the audience was, and that’s art, and short sentences, etc.  It isn’t all that removed from my advice to attorneys when I am consulting with them, by the way.

Q:             You had the academic knowledge, but how did you get the real-life understanding of prison conditions?

A:             Well, I had the letters from most of the SOA prisoners.  They reported not being able to get their necessary medicines, incompetent medical staff, abuse of the mentally ill, sadistic guards, shredded mail, lost property…  and then I spend 7 years talking to prison administrators, criminal justice professors, inmate groups, inmate family groups.  They taught me, for instance, that inmates don’t eat in a cafeteria.  No, it’s a chow hall.  When an inmate read my incorrect term, he had a well-deserved laughing fit.  Almost every day for 10 years I’ve learned something new—what a great project!

A:             I suppose, at first, the very thought that someone would help inmates write even more grievances (they do write a lot) was horrifying to them.  Of course!  But eventually, as they read the manuscripts, they saw that half the novel is an admonishment about writing stupid grievances.  If inmates read this book, and followed the rules and check lists, prison staff would have an easier time, frankly.

A:             One of the major appellate courts has a pro-se reader/attorney who has encouraged this book and helped me throughout the many drafts of it.  IF inmates follow the PLRA rules and their prison policy, as the book insists, then any filings that reach the court will be filings the court personnel can actually handle.  Right now, so many filing are returned because they are filed too long after the problem, or they’re filed in the wrong court, or they have more than one complaint/grievance in the filing, or – so often—are filed merely to cause someone trouble without being able to provide any evidence of wrong doing or wrongful condition.  If inmates followed the rules, the court would have fewer grievances to read, but they’d be the ones the court could address.

A:             A series of 4 graphic artists helped with the art work.  One thing I learned about artists:   they have to pay bills and aren’t fully employed.  So the first, terrific artist graduated from college and had the move to a full-time job.  His good friend who took over learned he could make a great deal of money by concentrating on silk-screening prints.  The next took a full-time job at a university.  The last, fortunately, was able to fit in this artwork between his flights to Italy and San Francisco, where clients paid him ever so much more than I was able to.  Depending on graphic artists is not for the faint of heart!

A:             The publishing world has changed so much, so fast.  My first 3 books (and 4 editions) were published by traditional presses, large publishing houses that make money by printing books they believe will sell for a set amount.  They couldn’t touch this one.  If I had used a traditional comic-book publisher (and I would have loved to), then I wouldn’t have been able to send the books into the prison where it’s needed.  This was a special-audience book, and so I used CreateSpace.com, a branch of Amazon.  That way, if someone orders a book, they print it right then—no piles of unsold books.  And they can send the book directly to the inmate;  as you may know, no one can send a book into any prison system.  Books have to be sent through publishers.  (A rare exception is the Books Behind Bars groups around the country, who fill inmates’ requests and are trusted by the prison systems.  These volunteers are saints.)

A:             Amazing responses:  first, so many inmates write to say that they ar grateful someone outside is concerned about their prison conditions.  Second, many write to tell me that they have followed the rules, but the prison staff does not.  (That’s a tough letter to answer for me.)  Third, a few readers are surprised that I am tough on the inmates, in this sense:  they broke society’s rules and were separated as punishment.  While in jail/prison, they have to learn to follow the rules.  The PLRA is draconian;  individual prison system’s rules frequently keep inmates from successfully writing to authorities.  SO the book bangs away at inmates, insisting they follow whatever rules their system imposes.  It doesn’t matter that an inmate doesn’t want to have to actually write a physical grievance.  The PLRA and prison systems require that they do.  So—don’t just complain, write.  Write it right while you’re at it, and here’s how.

A:             Right now, I spend all my time getting the word out that this book is available on Amazon.com for only $10.  We need every jail and prison to have at least one copy.  That is impossible unless people, like your readers, send a copy into someone they know Inside the Walls.

A:             Lucky you!  One in 100 Americans is in the prison system either awaiting trial, in jail, in prison, in an alternative punishment program, or on parole.  And you don’t know even one.  (I have cousins who ‘visit’ jails/prisons because they believe they can outsmart law enforcement and make money selling pot.  Wrong.  I have sent them copies of the book, which they circulate among their units.)  If you would like to get these books into prisons, why not ask your local jail if you can buy one and have it sent into the jail library?  Or have a Sunday School class, Girl Scout troop, etc., take this on as a project:  learn about prison conditions in your area, and offer the inmates some help writing successful grievances to get the conditions changed.

Q:             We will be looking forward to the results of your graphic novel, and I suspect you will indeed discover another need and project!