By Chuck GallagherOctober 30, 2013 No Comments

I fly a great deal, and for the most part, I would say about 95 percent of the time, I enjoy air travel. I enjoy talking to the strangers sitting in the seat next to me or even in the terminals during delays or layovers. Most of the time, I even enjoy the stale peanuts and orange juice concentrate. The only thing that ever really bothers me is when I hear of airline personnel doing something that borders on the unethical.

If I worked for Fly-by-Night airlines and your suitcase was late to the carousel by 10 minutes because I was feeling lazy or looking the other way rather than loading your suitcase onto the baggage cart, that’s poor customer service.

If I saw the suitcase come off the plane and I decided to intentionally “lose” it on an empty parked cart – or even damaged it, because I noticed the luggage tag had the logo of the football team that beat mine on Sunday, that’s downright unethical.

What then, would we call what happened at Air Canada’s terminal in San Francisco a few weeks ago?

Has anyone seen Larry? 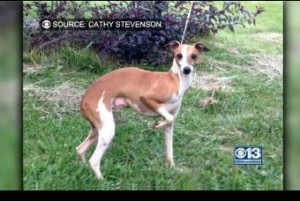 In an Associated Press article appearing on October 11, 2013, we are introduced to a situation involving an Italian Greyhound that disappeared from the airport – and the unethical cover-up that ensued.

First we must acknowledge that there was reportedly a delay as the dog was being held in a storage area between the flights.

Despite the fact his crate was locked tight with a sign to not take him out, a worker went ahead and opened the crate. Larry slipped his collar, ran out of the airport – and unfortunately, has not been seen again.

The dog had come from a tragic situation in that his owner had died, and he was being shipped to a new home. What could have at least been a bittersweet story, turned sour very quickly. Here is where the media got involved. A CBS affiliate inquired as to what happened to the dog.

Wheels off of the Plane

Instead of giving the local television station a heart-warming and gushing story that they were terribly sorry and they were doing everything in their power to help, here is the email accidentally sent to the station (it was obviously intended as an internal communication).

“I think I would just ignore (it), it is local news doing a story on a lost dog. Their entire government is shut down and about to default and this is how the US media spends its time,” the email read.

The statement quickly went viral and needless to say, there was outrage among dog lovers across North America as soon as it hit the social media.

The airline did what it could to cover their tracks by issuing, according to the AP piece; the following statement was issued almost immediately after their public relations goof:

“Air Canada acknowledges inappropriate comments were made in response to a reporter’s follow-up questions for additional details regarding Larry…These comments do not reflect Air Canada’s standards or professionalism, and do not refer to the search for Larry by Air Canada employees which is ongoing.”

Mistakes on Many Levels

As a dog lover, I can understand why an employee might have chosen to take the dog out of the crate despite the ties and the sign. He or she felt sorry for the little guy during the delay. He or she was wrong, and messed up, but I think many of us could have understood the compassion. Was it lousy customer service? We can debate that point forever.

However, the spokesperson’s email was internally stupid – and externally idiotic. Worse, it was unethical.

On an internal basis, it reflected an attitude of “we don’t care.” We don’t care if the dog is lost, we don’t care if it is never found and people in the United States should be more worried about their government than an insignificant animal. The email carried with it an internal feeling that tells us about the company’s culture and an external attitude of ethical indifference.

Organizationally, the email talks to a sloppy media relations effort, a lack of controls and discipline and possibly, an employee who is burned out, officious and unethical. The company badly needs ethical customer service training.

I don’t know if Larry will ever be found. My hope is that someone found him and he is now living a new and happy life. As for Air Canada, their problems transcend a lost dog and a great deal of soul searching is in order.

OF COURSE, YOUR COMMENTS ARE WELCOME!

POST SCRIPT:  It was the media attention and search effort that helped find Larry in the end. Early rumors were true, and he was hit by a car on Highway 101 near the airport. Some Good Samaritans, and apparently not the driver of the car that hit him, picked him up and brought him to the hospital. His injuries were critical, and the couple who picked him up off the highway stayed with the dog until he was euthanized. However, no one at the veterinary clinic made the connection between the critically injured dog they had treated and the dog missing from the airport. How this oversight happened isn’t clear, especially when volunteers and Air Canada staff were supposedly checking with local vets.