By Chuck GallagherApril 29, 2014 No Comments

It’s often been said, “Once a criminal always a criminal.”  I disagree!  People make choices and some of them have very negative consequences.  I know I’ve made them and live with the consequences.  But, a bad choice doesn’t mean that one is bad.  Hum…in the case of Barry Minkow…well perhaps he’s an exception.  Certainly his actions would fully support what many think. 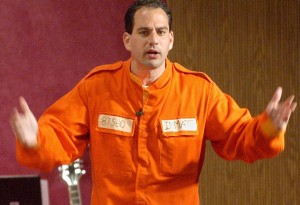 Former pastor and con man, Barry Minkow, age 48, was sentenced to five years in federal prison for stealing $3.5 million from his San Diego church and its members.  The tale of betrayal made the three-time felon one of the worst white-collar criminals according a federal judge.

Minkow became famous as a teenager in the 1980s for founding the ZZZZ Best carpet cleaning company, which became embroiled in a $100 million fraud. At age 21, Minkow became the youngest person at the time in U.S. history to take a company public and became very wealthy on paper.  For his fraud, he went to prison, was released in 1995 and two years later became pastor of San Diego Community Bible Church.  Guess he found religion in prison?  Minkow  was also ordered to do the time after completing a sentence for an unrelated scam that cost homebuilder Lennar Corp. some $580 million in lost stock value.

Minkow “used every mechanism available to steal money” from the church from 2001 to 2011, taking more than $1.3 million in donation checks, forging signatures on checks and taking out unauthorized loans in the church’s name, prosecutors said. The courtroom was full of current and former church members, some sharing emotional stories with the judge as Minkow stared ahead and turned his chair occasionally to whisper to his attorney.

Minkow stole $1.7 million and obtained $1.9 million in loans that are unlikely to be repaid, prosecutors said. Patricia Kuebitz said she lent Minkow nearly $300,000, drawing on her inheritance and a home equity line, and is now deeply in debt and fearful of losing her home as she raises a 15-year-old granddaughter.

“My trust in all people has been shaken,” Kuebitz told the judge.

Brett Wright, whose daughter was married by Minkow, said his former pastor stole a $75,000 donation that was intended to build a hospital in Darfur, Sudan. He made the donation in honor of his wife, who died of cancer.

“I feel sorry for you, Barry,” Wright said, turning to Minkow as he walked away from the podium.

Minkow received the maximum sentence of five years for conspiracy to commit mail fraud, wire fraud, bank fraud and defraud the federal government for taxes.  “In one sense, it doesn’t get much worse in the world of nonviolent, white-collar crime,” U.S. District Judge Michael Anello said.

Minkow has between nine and 21 months remaining on a five-year sentence for securities fraud conspiracy. In 2009, he used his high-profile status and access to national media to issue false press releases claiming Lennar was beset by faulty accounting, misappropriation of corporate funds and other wrongdoing.

“Barry Minkow is among the worst kind of predators,” said Laura Duffy, the U.S. attorney in San Diego. “He gained the affection and trust of his victims from the pulpit and then stole not only their money, but their faith in humanity, the clergy, the church, and themselves. This sentence will keep him from exploiting another victim for a while.”

Minkow played himself in an unreleased movie about his life that also stars James Caan, Ving Rhames and Talia Shire, said Bruce Caulk, the film’s director, who attended the sentencing. The film, which was shot before the frauds against Lennar and the church were uncovered, will need a new ending, he said.

I believe in Second Chances (http://secondchancesbook.com), but in Minkow’s case it would appear that he’s exhausted his share of redos.  It’s sad to see someone with talent misuse those gifts.  But, as I say often in my presentations – “Every Choice has a Consequence” and in this case…we see that over and over again.  What Minkow has done is given those of us who have made different more empowering choices a bad name by casting doubt on the possibility that anyone can change.  We can so don’t give up hope.

As for Minkow…well words escape me.

Ethics of Waiting for Veterans: The Secret Lists of the VA

Ethics of Waiting for Veterans: The Secret Lists of the VA