The Ethics of the Knee Defender

By Chuck GallagherSeptember 18, 2014 No Comments

I had a neighbor, and we’ll call her “Catherine.” She was the neighborhood busybody, and her favorite pastime was gossiping to one neighbor about another neighbor, and then going to the other neighbor – and, you guessed it, playing that neighbor against the first. When Catherine “did her job right,” the two neighbors would enter into screaming matches and indeed, one neighbor even tried to choke the other. Catherine had a small life, but it illustrates an important 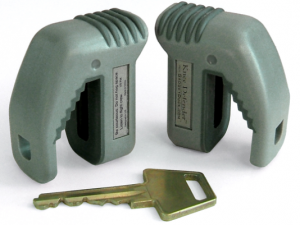 point about the airlines and the infamous knee defender.

If you have flown anywhere in the past 10 years, you will note that passenger planes have become more cramped and uncomfortable. You pay more for leg room (all of four inches) in addition to paying more for just about anything the airlines consider an extra. At this point the only “free things” you can get is the miserable, recycled air and access to the filthy bathrooms.

The misery of flying is exacerbated by reclining seats. There is no joy in getting crammed into a middle seat at the rear of the plane and then having the person in front of you lean all the way back. It has started shouting matches, fights, angry confrontations with flight attendants and has forced aircraft to land so that the police could cart the combatants off the flight.

I understand. It is one thing to get on a one hour flight from Las Vegas to Denver, but try LAX to LGA with the seat in front of you jamming into your knees. It could drive a meditative monk to go postal.

This is not an advertisement. It is a call to action. About 10 years ago, a clever guy from the Washington, D.C. area invented thick plastic clips that could be “jammed” into the seat in front of you to prevent their seat from reclining. The use of the clips (the Knee Defender) has sparked great controversy. After all, “who are you” to tell me my seat can’t be reclined?

It is a darn good point. If the seat can recline, why should another passenger keep that from happening?

On the other hand, if you are 6’4” tall and uncomfortable anyway, why can’t the 5’1” person in front of you stay upright just to be courteous? Does that person really need to recline in order to relax? Please.

Let me return to Catherine. The airlines are “Catherine.” They have made the entire process of flying absolutely miserable. In doing so, in attempting to cram as many of us into the aluminum composite tube as possible, they simply step back and allow us to slug it out. They enjoy the drama and the misery.

I find that ethically wrong.

All apologies to the Knee Defender advocates aside, it is the airlines who need to come up with solutions not an inventor whose product causes derision and division.

I am not an aircraft designer, I just fly a lot. I cannot believe, no; I refuse to believe that there are no possible seating alternatives to the current model. However, “Catherine” doesn’t want to see the status quo changed. Catherine loves it when we grumble and then they throw their flight attendants into the breach for good measure.

The airlines and their designers could do something, but they won’t.

For it is impossible to directly win against Catherine. She enjoys making us miserable and all of us need to acknowledge that fact. The only good news though, is that with each passing year her act gets more boring, her words become hollower and whereas she was once attractive, she has become shop-worn, uncomfortable and unethical.

My loyalty is completely gone Catherine, so don’t even bother.

I’ll go with whomever can get me there; whoever is the most convenient and cost effective. Until you recognize us as human beings, to me you are no more than an aluminum-composite tube that takes me from “A” to “B,” at 500 m.p.h.