Feeding the Homeless Could Land Men in Jail

By Chuck GallagherNovember 25, 2014 No Comments

This is one of those stories that requires two and three readings. In a story for NBC News (November 5, 2014) by writer Elizabeth Chuck, we learn that two church pastors and a 90-year-old man were charged for feeding homeless people in Fort Lauderdale, Florida. To make the story even stranger, despite the citations and threat of jail, the trio plan to feed the homeless at least once more before their court date. 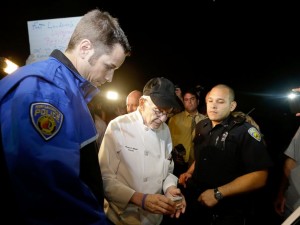 “Homeless activist Arnold Abbott, 90, and Christian ministers Dwayne Black of the Sanctuary Church in Fort Lauderdale and Mark Sims of St. Mary Magdalene Episcopal Church in Coral Springs were handing out meals in a park on Sunday, two days after Fort Lauderdale’s ordinance took effect, when police approached them with their sirens flashing, Black said. The three were issued citations and face a $500 fine or 60 days in jail.”

Abbott has been described as the Mother Teresa of Fort Lauderdale in that he feeds the poorest of the poor despite the new ordinance. He has been in trouble with the law before this incident, also for feeding the homeless. He is both loved and reviled, I suppose.

According to the article:

“The ordinance — the fourth one that Fort Lauderdale has passed this year concerning the homeless — requires groups handing out food to homeless to be at least 500 feet away from residential properties. It limits feeding sites for homeless to one in any given city block, and prevent feeding sites from being within 500 feet of each other.”

In other words Mr. Abbott is feeding the homeless population in areas where they should not be fed and within relatively close proximity to appointed facilities.

Both sides of a tough issue

I am willing to completely accept that Mr. Abbott is a good man. In a world often filled with anger, hate and evil, it is comforting to know that there are still people who care. He is 90 years old and in his remaining years he chooses to do decent things and not harm. Even if you detest the concept of homelessness, you must accept that Mr. Abbott is well intentioned. I am also assuming he is in full control of his faculties and that he can well verbalize his position.

However, I also know that the “homeless” are often not homeless in the truest sense of the word. There are numerous social services that have been created to help those in need – if they want it. Like it or not, many “homeless” have gotten that way because they are alcohol and drug dependent and they exhausted (or chose to exhaust) the loving-kindness of family and friends.

While we understand the spiritual values that Mr. Abbott and the two pastors embrace, we also understand what it is like to have the “homeless” camp out on your front porch or to use an alley by your building or your front yard as a public restroom or when they rant in alcohol-related dementia or fight or beg around children. Before I am accused of being hard-hearted, understand that I write this upon asking people who are in public service such as emergency workers. Every example I cite above is quite common and indeed, I am being kind and genteel in my descriptions.

Can an ethical balance be achieved?

Yes, an ethical balance can be achieved but it takes work. It is one thing to pass an ordinance or a set of ordinances, and certainly those ordinances need to be enforced, but what harm can there be with an on-going outreach and public relations program?

To be honest, there are some advocates who will only listen to their own agendas, but this is why it is so important to have a public forum. In fact, if working committees have been created in regard to these issues, why not invite the advocacy groups to join?

Upon understanding the intention of the ordinances it does seem so unreasonable that there can be a coming together of opinions and mindsets. I believe that good ethics and fairness are not exclusive. Sometimes all it takes is an open heart.

The question is – are both sides willing to solve a problem or are they more interested in preening for public attention?  It certainly solves no problem by putting well intentioned people in jail.

Broken Trusts: The Poor Ethical Side of Nursing Homes

Broken Trusts: The Poor Ethical Side of Nursing Homes