5 Ways Adults Can teach Teens not to Lie

By Chuck GallagherNovember 19, 2015 No Comments

Teens will lie.  So will adults.  Lying is not a youth issue its a human issue.  The challenge for most of us is curbing the natural tendency to lie or creating an environment, especially for our youth, so we can teach teens not to lie. 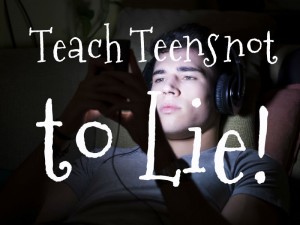 The Josephson Institute of Ethics did a study surveying teens about lying.  92 percent of the teens surveyed admitted to lying to their parents at least once in the last year.  My question: only once?  Somehow I think the teens are lying about lying – which by the way is not uncommon for our species!

Adult or teen, the act of lying is natural.  We don’t care to admit it openly, but a little “white” lie never hurt anyone or so we like to rationalize.  In fact the word – rationalization – is at the heart of where the line is drawn that allows moral people to engage in lying.  The challenge for our teens becomes – they have not yet fully developed their cognitive skills to discern the potential consequences that result from engaging in the act of lying.

If we believe that teens lying is a problem of education and that teaching teens not to lie is a worthwhile endeavor, then let’s explore five ways we can raise ethical awareness and provide a solid foundation helping our youth leave the value of the truth.

If you expect your teen to tell the truth then TELL THE TRUTH!  Everyone knows that kids are a sponge – especially young kids – and what you say and do is being recorded all the time.  So if you’re at home, the phone rings, your child answers telling you mom or dad – phone – and your response is to tell them to tell the caller that you’re not there or in the shower when neither is true…you have set up a pattern of lying that they learn early.

You are your child’s role model.  Be truthful with them and with others. If you model behavior that justifies a “little fib” then they will too, except they don’t always have the discernment to know what “little” really is when it comes to lying.

Children, youth, tweens and teens are never too young to understand and learn the concept of being honest.  We rationalize that lying saves the recipient from unnecessary pain or embarrassment all we are doing is setting the example of what rationalizing wrong behavior looks like.

(2) Expect the Lie and Don’t Freak Out

Let’s be honest (funny to say that here) but we all know that our kids will lie to us.  Expect it.  It’s a natural part of life.  That doesn’t mean that we are forced to like it, but at least we can be calm about it when it happens.

You caught your kid in a lie…now what?  While I’m a strong believer in choices and consequences, it’s important to not have a knee-jerk reaction and go crazy.  If you want to have an open and “honest” relationship with your kid, doesn’t it stand to reason that talking about what happened and why is far more valuable than going crazy with some punishment administered from a “holier than thou” parent that lies too?

You teen tells you he/she is visiting friends.  The friends parents happen to call you to find out where their teen is – thinking they are with you.  Oops…you both find that your kids have lied and all the kids are at a party that isn’t condoned by the parents.  Your choice – become overly strict – turn off your teen – reduce trust and communication and likely ensure that their behavior will continue.  Or, you could openly talk about your dissatisfaction with their choices.  Examine why they felt the need to lie to you about their choice.  Discuss the potential ramifications of their choices.  And, lastly, allow them to become a part of establishing the consequences they should receive for lying in the first place.

Parents – let’s be real.  You lied to your parents and you swore that you’d never act the way your parents acted (at least most of us made that vow)…so now’s the time to honor it and not freak out!

Look at yourself in the mirror and ask yourself are you the person that you’d want your kid to be?  That’s a tough question.  I had to ask that of myself when my kid got himself into trouble.  Yes he made the choice to do wrong, but what role did I play in allowing him to believe that wrong could be right?

When I confronted my son about his poor choices, his response was “well Dad you did xxxx when you were young.”  He spoke the truth.  It was then that I dedicated myself to being transparent with my two sons.  I may not be perfect, but I am capable of modeling behavior that is both healthy for me and for them.

By the way, being honest is really easy in one sense.  At least when you are, you don’t have to try to remember the lie so you don’t get caught in a lie.

(4) Allow teens to be a part of Setting Boundaries

Rules are funny things – it’s far more difficult to break rules that you are instrumental in setting!

My wife said to me not long ago, “you tend to drive too fast.” OK – she’s right.  I admit it.  Then she followed her comment up with “if you could set the speed limit what would it be?”  Now that was a dandy question.  It’s not that I don’t thing there should be a limit – I believe in speed limits.  I just think they are set too low.

As I write this article I am flying back from Amarillo, Texas from a wonderful program called Leadership Perryton (best municipal leadership program I’ve seen).  On the way to Perryton I noticed that the speed limit was 75.  That’s the speed I normally drive on the interstate highway.  Funny I didn’t speed…cause the boundary made sense.

The same principle applies when it comes to boundaries that our youth must follow.  As parents we can be the autocrat and establish the “rules” – realizing that those rules may also create resentment and motivation to lie.  The alternative is to have an open dialogue about what is reasonable and as youth demonstrate their capability with handling more responsibility more opportunity will be given.

(5) Speaking of Responsibilities – what about Privileges?

If we believe in training early then lets train our kids to accept the concept that with responsibility comes privileges.

Our granddaughter is being taught well by her parents the value of responsibility and privilege.  Her dad created a little business – chickens and eggs (ok I get not everyone can do something like this, but keep an open mind here).  Our granddaughter is learning bit by bit the work that is required to care for her chickens which, by nature, produce the eggs.  As free range chickens, the eggs are in demand and the money that is made is divided three ways: (1) 10% for church; (2) 20% for savings and (3) the remainder saved for use at a later time – Christmas presents and the like.

Here’s the significance of what I’ve been able to see thus far – our granddaughter places value of what she does and what it provides her.  She is learning what so many of us missed (at least I did in my formative years) and that is money doesn’t grow on trees or what you get doesn’t come from debt.

Beyond the financial lessons – she is learning that the more she is responsible the more her parents trust her to have outside of the house privileges.  Relationships are built and based on trust.  The more your kids can trust you to trust them the greater the chance that they will honor that trust by making the right choices and by telling the truth.

Life in the fast lane was a cool song, but today, especially for our youth, it is a way of life and unfortunately there are far too many competing items for our kids attention.  Let’s not give our teens a reason to turn to outside influences.  Be honest.  Create a foundation of trust.  Set a positive example and know that the pay off for your hard work will be the creation of a foundation that a child can stand firmly on as they grow and develop into an adult.

What Your Kids and Jihadists have in Common!

What Your Kids and Jihadists have in Common!