Down Syndrome: Blevins Middle School Teaches Us about Ethics

Blevins Middle School is located in Ft. Collins, Colorado, a small city that is about 90 minutes north of Denver. There is an interesting story that comes out of a class of 11 and 12 year olds that many adults could embrace.  It relates to a Down syndrome student and the power of an ethical student voice. 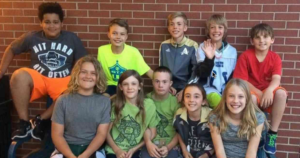 Brady Green was a fifth grade student who has Down syndrome. Brady was scheduled to start in a special school this coming year, while the rest of his classmates were scheduled to go into Blevins Middle School. This is apparently standard procedure in the Poudre Valley School District as in many other school districts. Down syndrome students are apparently segregated at a specific and pre-determined age and grade-level. However, we should avoid easy answers.

In preparing this blog, I did a bit of research. There are children with Down syndrome who may test out in terms of IQ as high as 70 to 80, though typically it is closer to 50 (the general population of “normal” students tests between 70 to 130). In general, IQ among Down syndrome children is increasing. In terms of EQ, or emotional intelligence, many of these children test higher than many “normal” children their ages in terms of humor, compassion and empathy.

As the school year was coming to an end, Brady Green’s classmates did not want to say good-bye to him. They like him. They like the way he makes them feel and they enjoy his warmth and friendship. His classmates stepped up and mobilized; they and their parents went to the school district and fought for the right to keep him in the middle school, and not to shuffle him off to a special school. The students won, and the school board felt that his classmates made a concerned, and dare I say, ethical argument.

The argument may open whole new ethical vistas in the years ahead. For example, what factors should determine the segregation of a student?D

“He has one extra chromosome and that doesn’t really mean anything.”

– “Storm,” a classmate of Brady Green

In the past, we have relied on our educators to tell us when a student should be admitted to a “special class.” It has been about IQ or what has called a “learning disability.” As teaching methodologies improve, are those arguments still valid? Could we delay placing these students into special classes or special schools?

Should segregation come about as the result of a genetic condition in any case? This is not as easy a determination as might have once been the case. I mentioned above that IQ among some Down syndrome students has been increasing. I have only now learned that some of these students have been accepted into college! I have also learned that about 38% of Down syndrome adult are either living on their own or have gotten married.

Why have some Down syndrome students been shuffled off to centers where they are relegated to making potholders and lanyards when they could have learned the intricacies and credentials of vocational licensing and certifications? Was it laziness, or policy or Heaven-forbid, bias?

I know that all too often, this blog features scandals. We point out cases of unethical behavior among government, industry, sports and associations. The lack of ethics, the lack of people fighting for what is right and noble and true, can often seem astounding. However, we should never close ourselves from ethical acts of decency and kindness.

The students at this middle school are obviously seeing Brady Green as a whole person who makes them feel better. They love him enough to fight for him. In turn, he loves them. If they are elevating him, is he elevating them?

In an age where emotional maturity (EQ) is sometimes sorely lacking, is Brady Green raising the emotional awareness of his classmates while they raise his IQ?

In any case, these arguments are raising ethical arguments in education that need to be addressed. In the meantime, I am exceptionally proud of Blevins Middle School and its students, and you should be as well.