Chick fil A – Ethics in Action, Despite the Critics

The Chick fil A fast food chain has had more than its share of controversy over the years. Some critics resent its rather conservative, religious stance. Among its policies is that the chain in closed on Sundays so that employees have a chance to spend time with their families, and if they choose, to go to church. Executives of the company have expressed opposition to the gay 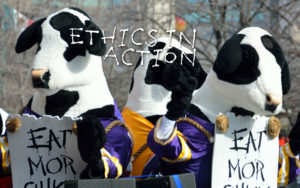 lifestyle – and that has gotten them slammed in the media.  Yet, Chick fil A has demonstrated that they too will bend even their rules when it comes to doing the right thing and this is ethics in action!

However, it should be pointed out that executives from many companies have taken controversial stances on issues including Target, Starbucks, Unilever, Edelman PR and Apple. It seems that outrage in regard to issues is often defined by the social agendas of their customers. I am not saying it is unethically right or wrong, just that what may be angering to some customers is perfectly acceptable to others. Last winter, some conservative Christians called for a boycott of Starbucks, just as many progressives called for a boycott of Chick fil A. Neither boycott worked.

Chick fil A has thousands of employees, and they embrace most nearly every opinion on the spectrum. Indeed, if the internet is at all reliable, some gay Chick fil A employees have stated that boycotts worry them because they lose hours.

The recent mass shooting in Orlando brought the community together in many ways. According to USA Today (June 15, 2016):

“Employees at one Orlando [Chick fil A] location fed those donating blood to the victims of the nightclub shooting…Chick fil A employees in Orlando showed up for work Sunday, a day the chain is typically closed, in order to feed first responders and blood donors for victims of the shooting at a gay nightclub.”  I don’t know about you, but this to me is a clear example of ethics in action.

Also interesting was this quotation from the article:

“The food donations are another sign of how far the company has come in re-crafting its image after CEO Dan Cathy incited customers when he spoke out against gay marriage in 2012, leading to protests at stores.”

However, the company has pointed out that over the past 70 years, they have modified their Sunday closing policy in response to communities in need during times of emergencies and catastrophes. Orlando Chick fil A employees have expressed that what they did was to support the community that they love.  A company is nothing more than a group of people coming together for a common purpose and supporting their community in contravention of their Sunday policy is ethics in action.

There are many ethical issues to consider in regard to Chick fil A. The first issue is if a privately-held company, even one in excess of $6 billion in revenues over more than 2,000 locations has the right to express their beliefs. Some would say that ethically it is a slippery slope. Again, if Chick fil A can be boycotted for its former, and somewhat stronger stance on gay issues, do we allow the issue of boycotts to extend to all companies that offend?  The challenge is realizing that ethics in action means stating one’s beliefs and acting in a way that one believes is ethics.  Regardless of how senior management at Chick fil A feels about gay marriage, their ethics in action demonstrates that supporting humans helping other humans is clearly in line with their Christian beliefs.

For example, last year, Chick fil A was getting resistance from the Denver City Council for wanting to open a location at the Denver International Airport. That is all they wanted to do; no revival services or baptisms on the concourse! Now suppose another group expressed anger at Starbucks for its policies – and more so, because Starbucks is publicly-traded. Should Starbucks, also with locations at Denver International Airport be forced by the city council to shutter its doors? My question is, where would it stop?

Interestingly, Chick fil A is way out in front of other chains on many issues; e.g. they are opposed to antibiotics used in raising chickens as some critics feel it is dangerous for our health. Should other chains who are still allowing antibiotics in their chicken products be allowed to remain open?

Chick fil A has a very low franchise price as opposed to other national chains. Could potential franchisees of other chains claim that those operators are instituting discriminatory policies against entrepreneurs of less economic means?

The arguments shown above are designed to get more and more absurd. In truth, it does appear as though Chick fil A has softened its stances, and they should be at least recognized for breaking policy to assist their community in a time of crisis.  This is ethics in action.

However, all of this may come down to the simplest argument of all: if one doesn’t agree with Chick fil A’s policies, why eat there? Conversely, does any group, such as the Denver City Council have the right to dictate to the public where they can – and cannot eat – based on their own biases?

Perhaps we should appreciate that the employees of Chick fil A in Orlando, on a volunteer basis, decided to do something decent to help others during a tragic time. They were exhibiting good ethics. Maybe that is enough, and like their food or not, we should appreciate the fact that they demonstrate ethics in action.

Your comments are welcome.