Life Out of Balance – The Foundation for Unethical Choices

By Chuck GallagherSeptember 26, 2016 No Comments

If most people were asked, “Would you voluntarily do something that is unethical or maybe illegal” they would answer – “Heavens NO!” We all, by nature, prefer to do the right thing – it’s natural. Well, it’s natural till we’re faced with enough pressure that we cross the line. Life out of balance creates the tipping point for good people to make bad choices. 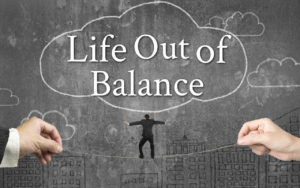 Through many years of observation, in my work as a professional ethics consultant and advocate, I have seen more examples of circumstances where good people, people that are well intentioned, make bad choices by taking one step on the slippery slope of unethical activity. And, from experience, once on that slope – well the word “slippery” can be an understatement.

The process of making bad choices, unethical choices, begins with a simple almost thoughtless decision. How do I know? Well, I am living proof that good people can make some really bad choices and the consequences most certainly can be devastating. While not proud of what I’m getting ready to admit, I have made unethical choices and spent time in federal prison as a result. So, suffice it to say, I know a thing or two about the simplicity of making one step on the slippery slope that can lead a person to choices that are life changing.

Life Out of Balance


In most ethical lapses, people don’t start off with the intent to lie or defraud. Instead, they get caught up in a messy situation and compromise their ethics as a way to dig themselves out of their hole. What begins as a seemingly minor infraction spirals out of control over time – in other words they get caught in the unethical continuum.

Quirks of human nature show that we tend to fall in love with what we have. Our aversion to loss is a strong emotion. Therefore, if our money, health or relationships are challenged and we risk loss in any of those areas, we are open to making bad choices. When life gets out of balance we tend to search for quick solutions.

The Three Components of Bad Behavior

It’s not just power or position that contributes to the fall of smart people.  Life out of balance creates the foundation and if you look at any ethical failure, there are three components that always are present in some form or fashion:  Need, Opportunity and Rationalization.

Research has shown that these three behaviors are at the core of what would cause or allow an otherwise ethical person to make unethical and potentially illegal choices. These components are like the legs of a three-legged stool. If one component is missing you can’t stand on the stool or the potential ethical lapse will fail.

NEED. Described as perceived pressure that a person is experiencing, need is the first and critical component of what motivates a person to stray from ethical to unethical. Need may come in a variety of forms. The person who is in too much debt likely experiences financial strain – which was the root of my need. Margaret, a church secretary, found her need triggered by her granddaughter’s diagnosis of cancer. Infamous Bernie Madoff’s need was certainly not money; likely, he was triggered by the need to be infallible. Whatever the pressure, need is the core emotional state that starts the ball rolling from a choice that is ethical to unethical.

OPPORTUNITY. It makes no difference what your need may be if you don’t have the opportunity to satisfy it, then the unethical and potentially illegal choice fails. Without Opportunity there is no fuel for the potential unethical fire. I was a trusted employee, and with that trust came opportunity. Margaret was trusted, and had been for so many years that no one could comprehend she was capable of any unethical activity. Madoff took opportunity founded in trust within the Jewish community to a new level.

RATIONALIZATION. Need combined with opportunity provides a firm foundation, but the glue that holds unethical activity together is the ability to rationalize what is wrong or right. If you ask most people found guilty of unethical/illegal behavior, they will tell you they felt their actions were legitimate. I, for example, rationalized that I was not “stealing” money as long as my intent was to pay it back. Further, I solidified this mental game by paying some of the money back. “Surely, I wasn’t guilty of stealing money as long as I was paying it back.”

That, of course, is a clear example of “‘stinkin’ thinkin.’” The mind can be tricky and when you combine need with opportunity, and can rationalize bad behavior as good, you have the perfect storm to move from ethical to unethical, and potentially illegal, behavior.

Every organization needs to remember that the creation of an ethical culture is exemplified in the actual behavior and attitudes of all team members. The question is not so much whether you talk the talk (in policy documents, training materials, video or webinars), but whether you walk the walk.

Want to create a culture of ethical behavior in your organization? It’s easy if you think about it. When you start by understanding how good people make bad choices, and follow it with an effective ethics-training program that reinforces ethical choices and accountability, you have a recipe for success. Every choice has a consequence. What choices do you make for your organization to help keep your most valuable assets between the ethical lines?

Unethical Practices at Volkswagen – Huge Losses – Worth it?

Unethical Practices at Volkswagen – Huge Losses – Worth it?