By Chuck GallagherJuly 2, 2020 No Comments

The competition between mobile carriers is fierce, to say the least. The “minutes” you pay for an amount to huge, multi-billion-dollar revenues for several companies. Despite all of the noise about quality and coverage, the big prize, the Holy Grail if you will of mobile service is speed. Of that technology the state of the art currently remains at something called 4G, with everyone aspiring to 5G. The “G” stands for generation and all things being equal, 4G 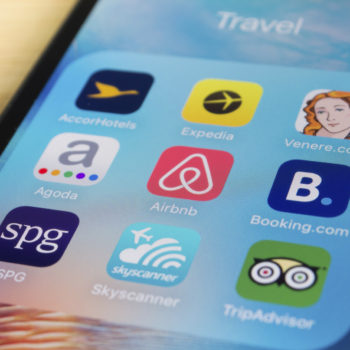 service is faster than the old 3G service. Most individuals who have smartphones (and that’s pretty much everybody) don’t know much about the technology but they do know 4G is a faster connection than 3G as AT&T pulls a fast one but it’s not about wireless speed.

There is no 5G service and everyone in the industry knows it. Though it might seem a relatively insignificant matter, given the billions of dollars involved, the promise of a carrier having 5G capabilities would be a strong selling point.

A lawsuit has been filed by Sprint against rival carrier AT&T for intentionally trying to mislead customers. AT&T has placed a label on its smartphones that says “5GE,” implying that the phone will connect users to a 5G network.

As the suit was brought forward, the AT&T CEO, Randall Stephenson defended his company to the media by saying “This is all a precursor on how you get to 5G. That’s why we call it 5G Evolution — it’s an evolutionary step.”

The “E” stands for “Evolution,” but frankly no one can guess what that evolution may mean. AT&T has launched the “Evolution Service” in 400 markets. Stephenson continued,

“There aren’t any 5G, what I’ll call full 5G phones, available in the market. We’ll have some in the market this year – Samsung and some others are putting some phones into the market; we’ll be selling those and you can get a full 5G experience.”

As I write this, I am reminded of my grandmother’s old-fashioned console radio with all of its knobs and buttons. On a really clear day you could get a station from a hundred miles away, and when the stars aligned, you could barely make-out a high-powered station from the next state. However, on the console itself were tuner buttons that said, “Tokyo” or “London.”

The 5GE label is a promise, a deceptive promise that someday there will be a faster service delivered. Having the “experience of 5G” is far different than 5G.

Given the dollar amounts at stake here, this seemingly innocent fraud means a tremendous amount of money. Yes, it will mean incremental sales in a saturated market but more importantly it represents millions, tens of millions of mobile minutes.

In our digitized age with hand-held devices, those of us who are older, marvel at those of us who are younger and who have been brought up with that we perceive as technology. In fact, it is not the technology we marvel at but an algorithm, a set of steps we take to achieve a goal (if not “a” then “b,” if not left, then right). There are, to be sure, technology experts who understand the inner-most workings of software and the code that makes it function but most of those who use the technology might know the steps required to change our ringtones or to post something on Instagram, but for the most part our everyday knowledge is limited – and the hi-tech world knows it.

Bringing it back to the world of 5GE and the intentional deception, mobile phone carriers such as AT&T gear their advertising with the knowledge that most of us understand 4G was somehow better than 3G, but that we have no idea why. It is not a stretch for them to realize that for the most part, no one understands that 5GE is still 4G with a few bells and whistles. While my grandmother’s radio may have said “Tokyo,” unless the radio accidentally picked up a commercial for a Japanese restaurant in the next town, chances of reaching Tokyo were nil.

AT&T saw an opportunity to sell more mobile devices and increase customers by advertising something they knew no one could achieve at this time. The need for them to advertise a misleading label was based on greed, the same driver as the old Philco company used to put Tokyo on grandma’s radio.

The rationalization was simply that AT&T understood we live in an age of algorithms and acronyms, but with very little knowledge behind it. Despite all of the sophisticated displays of terminology and terminology, those who bought 5GE were just getting 4G because AT&T pulls a fast one but it’s not about wireless speed.